This section of the walkthrough will explain the in-game tutorial to you. Basically, it's a translated version of the in-game tutorial, but I also add some comments and important information that will (hopefully) help you on your way to become the harem king. I tried not to make the walkthrough overly monotonous and complicated, so I hope you don't die of boredom while reading this.

Let's begin, shall we?

Let's get started with the tutorial. Open the app or go to vcard.ameba.jp, and log-on if necessary. If you have trouble registering, look at the Setting Up page for more information.

After starting up the game, you'll be greeted by a nice opening animation that shows a bunch of the girls. Cute, right? Let's move on.

Now, some new girl will greet you on the next page. She'll say something like "Oh, it's a new semester, nice to meet you!"

This girl is basically the girl that will give you new information, teach you about the game, tell you about the events, give you tips and tricks about being the best GF Kari player, and just overall help you throughout the game. Her name is Wakabayashi Riko and she's a third-year. 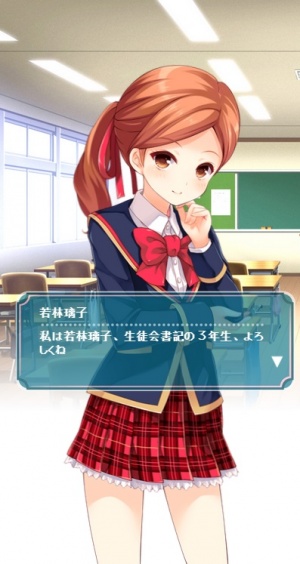 She'll help guide you through the game.

Now, you move on to student registration! This is where you'll give yourself a name and a nickname.

The first blank is for last name, second one is for first name, and then last one is for nickname. You can put Arabic letters, English letters, or Japanese characters for your name. However, note that the First Name and Last Name categories are limited to FOUR characters, while the nickname is limited to SIX characters. Choose wisely! 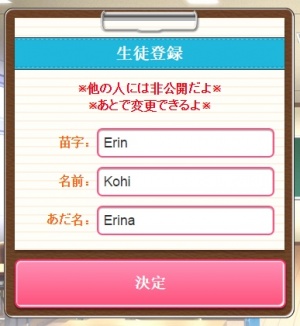 A picture of the name selection screen.
File:Tutorial2.JPG
271x271px
You'll then be asked to confirm your entry. Press the red button to continue. The blue button takes you back to edit the names.

Do you prefer COOL girls, SWEET girls, or POP girls? Look at the sample girls! Choose the type that has the cutest girls to you and that type will then be known as your STARTING TYPE!

Here's a more in-depth explanation about this type-choosing system. All girls in this game are divided into three different types: Sweet, Cool, and Pop. Each type has its own advantages, although they aren't THAT noticeable. SWEET girls usually have better defense stats, COOL girls have better attack stats, and POP is usually well-balanced. 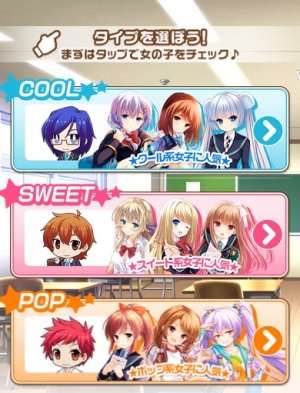 Which do you prefer?

The type that you choose here will influence your starting card. If you choose SWEET, you'll get Kohinata Ichigo (R). COOL will get Murakami Fumio (R), and POP will get you Sakurai Akane (R). This girl will be set to your main girl, but you can change who your main girl is at anytime.

You will also get a 5% stat bonus on your 5 main girls that match your starting type. You'll be able to select your 5 main girls when you build your deck later in the game. But regardless of your type, you won't receive bonuses or penalties to the chance of getting any girl in the future. There will also be no stat penalty to girls that don't match your starting type. Your starting type also affects how your male-character looks, and which photo pieces you can get in the game. You can always change the type your character is associated with once, so for now, just choose your type based on which type of girl looks the most aesthetically appealing to you! The 5% bonus won't matter much until you get a nice collection of powerful cards.

You'll then get a present from Riko for getting this far - it's a Date Ticket. These will be explained more later. 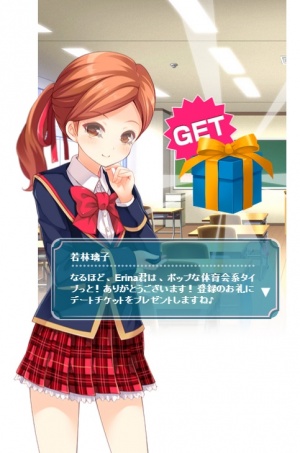 A gift from Riko!

Now, you can go to an orientation session or just skip the rest of the tutorial and go to the game. I recommend all new players do the orientation because it explains all the game mechanics. Press red to go to orientation, blue to skip. If you chose blue, skip on over to the Main UI. Otherwise, keep reading!

Let's begin by rolling the gachapon! If you don't know what a gachapon is, it's basically a machine that gives you a random chance of obtaining a certain item. In this case, the gachapon will allow you to obtain a random girl's card, although this time the result is pre-decided based on what you chose as your starting type. Roll it, and you'll get a Rare card! 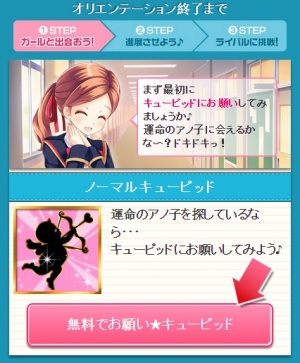 Let's take a test run on the gachapon!

Afterwards, you'll arrive at the results page, which contains the girl that you obtained and her stats. Each girl has an Attack Power, Defense Power, Cost, and Graduation Reward. All girls of rarity R and above have voice acting as well.

Graduation Rewards are used for when you want to sell a girl. You obtain however much Garu (the currency in this game) as the graduation award specifies.

This is one of the basic mechanics of the game. Click on the big button to move on (there should be an arrow pointing to it, don't worry about the other UI mechanics).

The basic mechanics here are easy. All you want to do is keep clicking that big red button that says "ガンバル." This will simulate you going to class. However, keep an eye on your stamina (the red bar that is currently 18/20). Once it drops to zero, you can no longer go to school, and must wait for it to recharge. The yellow bar below the stamina bar is your EXP bar.

Whenever you go to class, you have a chance of getting a reward as those four question marks represent four different types of rewards that you can get. They are generally cards or card pieces. Once you discover one of the rewards, the question mark will be revealed.

Also, note how there's a date system. Once your character progresses through multiple class sessions, he'll move closer to the flag at the top of the screen. Once you reach the flag, you'll progress to a different section of the day, or the next day. The further you get (in the school year), the better your rewards will be, and the more stamina/exp/money you will lose/gain whenever you attend class.

In the image above, you can see how one of the rewards was revealed to be a normal card. You can also see how the player is getting closer to the flag, and that stamina has decreased (-2) and exp has increased (+2). When going to class, however, you don't always get rewards. Sometimes you get dialogue between girls, or your affinity increases with some girls. A lot of things can happen, but that's not too important now. Try it yourself if you want!

Usually the rewards from going to class are just Normal cards, but in this case, you get the same Rare that you got from the gachapon earlier! What does this mean?

If you ever get two of the same card, you can COMBINE them together to form a "+" version of the original card! This means that if you combine two of the same R cards, you'll end up with one new R+ card. Transformation is useful because the new card gains stat bonuses - it takes the card's original base stat and adds 5% of the cards current stats to it. Don't worry too much about the logistics here, we'll explain this in depth VERY SOON!

It's pretty complex, but you'll understand with due time! Feel free to ask around the wiki if you have more questions regarding this process, because I know it's really tricky and somewhat convoluted. I'll explain this more later, so don't worry too much if you don't understand this process.

Go ahead and transform your two R cards. Note how the card's stats (attack and defense) were increased, but its cost stays the same. Really useful, right?

Now this is what you've all been waiting for, right? Battling with your deck of girls!

You don't really have to worry about forming your own deck though - the game has a pretty decent auto-sorter that will work well until you get up into the really late levels. The game will just stick whatever girls you have into your team, as long as you still have attack points left to spare.

You then fight against your opponent's DEFENSE TEAM! The defense team works the same as the attack team, except that DEFENSE POINTS are used instead of attack points. Easy, right?

When you battle people normally, you try to steal a card piece from them. Make sure you select the card piece you want to steal before going into battle, so you don't end up collecting the same card piece over and over again. Once you get all the pieces of a card (6 different ones), you can form that card! There are different types of battles, however. You can check out an overview of them on the Battle (バトル) page.

When you win battles, you get Men's Points. These points can be used to get rewards like stamina/attack recovery potions and such. They are also used to determine your class rank.

As a quick side note, while the defense stat does protect you from opponents attacking you and defeating you, it doesn't help much in any of the current event types. The more important stat types are Attack and Stamina. Keep this in mind when you distribute points to your three stats (Stamina, Attack, Defense).

In this case, we're feeding a Normal card to a Rare card. That's usually what you want to do, since most normal cards become useless after your first few levels.

Try leveling up a girl to her max! That way, she'll have her full stats, and she'll be the strongest she can be at the time. However, later, you'll figure out how to make a card even more stronger. You can also max out the support cards for a larger stat bonus, but that is not very important right now.

The game has taught you the basics of the basics of what you need to do in order to survive at this game, and this English-translated tutorial has done the same. So, what now?

What I did at this point was just a ton of trial and error and google translate. The game did only explain the basics, so there's still a ton more to learn. Of course, not knowing much Japanese only makes the process more painful.

That's where this Wikia comes in! I'll be writing out a Beginner's Tutorial and Tricks/Tips to help you guys get started with the game and understand the basic routines that you should be doing while playing the game. This will probably be orientated towards players under Level 20. I'll probably have to elaborate on more advanced mechanics as well later on.

I'll definitely also comment on the daily rewards and things that you should pay attention to. There are also some Japanese characters that you should quickly familiarize yourself with to make things a lot easier.

Translate fansites and Japanese wikis based around GF Kari to English if you have no clue what you're doing. It might actually help!

There are some things that I still don't even understand, so don't worry if you're feeling lost or overwhelmed by this game. Once you get the hang of it, everything becomes really simple and cyclic - there's just a certain set of things you have to do every so often! Go try out the game, and experiment a bit.

Good luck, and I'll see you soon with the next section of this tutorial.

(For now, you can view the individual pages of the Wikia for more information)