The Play section is the rhythm part of the rhythm game. If you're not (just) here for the cute girls, you're here to tap along to the beat of some catchy songs!

For the most part, navigating your way through is pretty straightforward, but here's a more exact rundown of the steps you take to play through a song.

Upon entering the Play menu, you'll be presented with this screen: 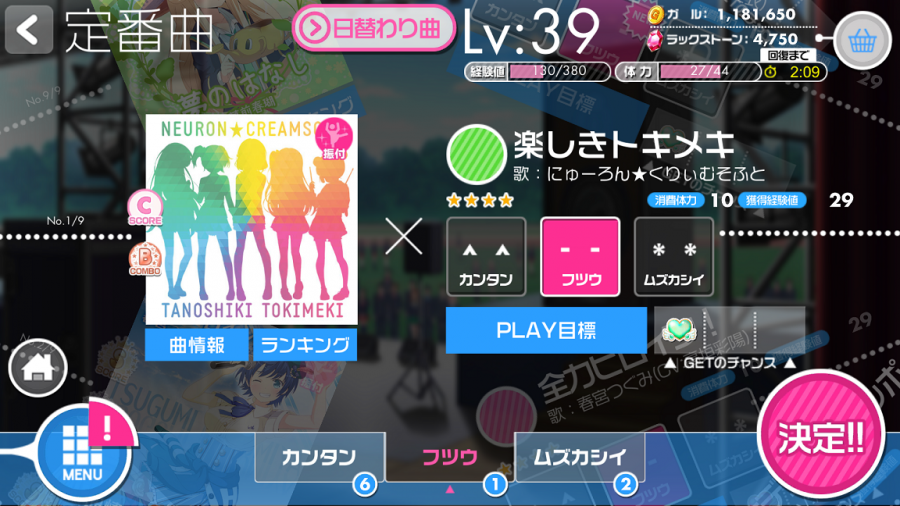 By default, you will be presented with the Side-A Songs; you can switch to browsing the Side-B Songs and Special Songs at any time by tapping the button on top to the left of your player level a few times (cycling is a little irregular for the time being). You can swipe up and down in the main part of the screen to browse through all the songs available on a difficulty. You can switch the level of difficulty you're browsing with the tabs at the bottom of the scren (the circles display how many songs of that difficulty you haven't played yet), or you can switch by using the buttons in the center: [^ ^] for Easy, [- -] for Normal, [* *] for Hard ([> <] for Expert, but this is accessed only at the bottom for Expert Side-A songs).

The left side of the screen displays the cover art for the song, with your highest Play Goal rank achieved for Score/Combo/Clear on the left (and the icon reading 振付 at the top-right of the art appears to indicate if a song has dance choreography). Below the art are buttons for Song Information and for score ranking (on the ranking screen, the first tab shows your place and those around you in the ranking; the second tab shows the overall top scores; and the third tab seems to show friend scores).

The right side of the screen has more information:

At the bottom-right, the big pink button is what you press once you've made your decision! 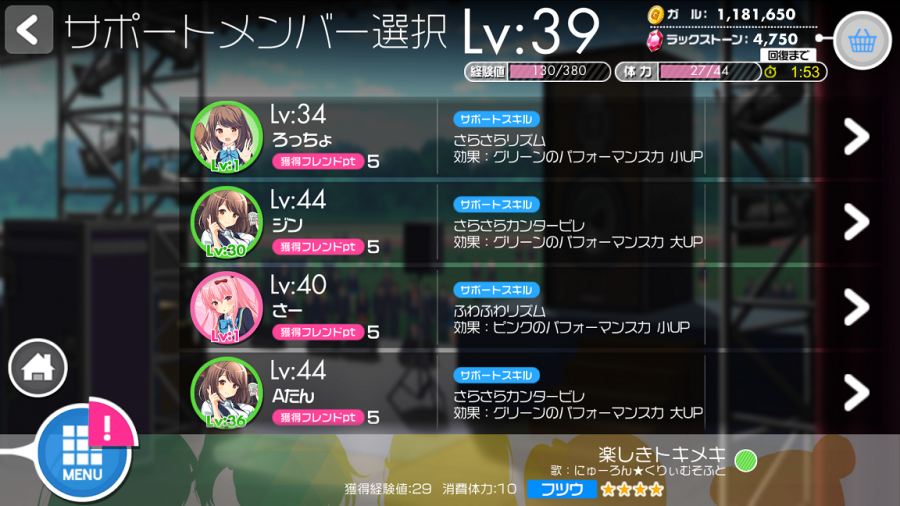 Following that, you're given a choice of Support Members to choose from; at the top of the list will be users from your friends list, and after that, a random selection of users. Support Members provide two benefits. Firstly, they will boost your Performance, allowing you to score higher on songs! You'll want to match the color of the support member to the color of the song you're playing (displayed at the bottom of the screen) and usually you'll want to choose one offering a large boost. 小UP is a small boost; 中UP is a medium boost; and 大UP is a large boost, so try to pick support members with a support skill that has "大UP" at the end (see the middle column of the list, in case you're lost here). Secondly, you get Friendship Points from playing songs with support members - 10 points for using someone on your friends list, and 5 points for a non-friend support.

This screen only comes up if you have more than one Center Girl. Here, you're shown all the Center Girls you're managing, and their clothing boost is listed at the bottom of their icon. You'll want to pick the Center Girl providing the best bonus in order to score higher on the song! Fortunately, certain girls provide +10% bonus on certain songs, which is shown through the bonus text being displayed in yellow, and the little pink speech bubble indicating that the song is that Center Girl's specialty. 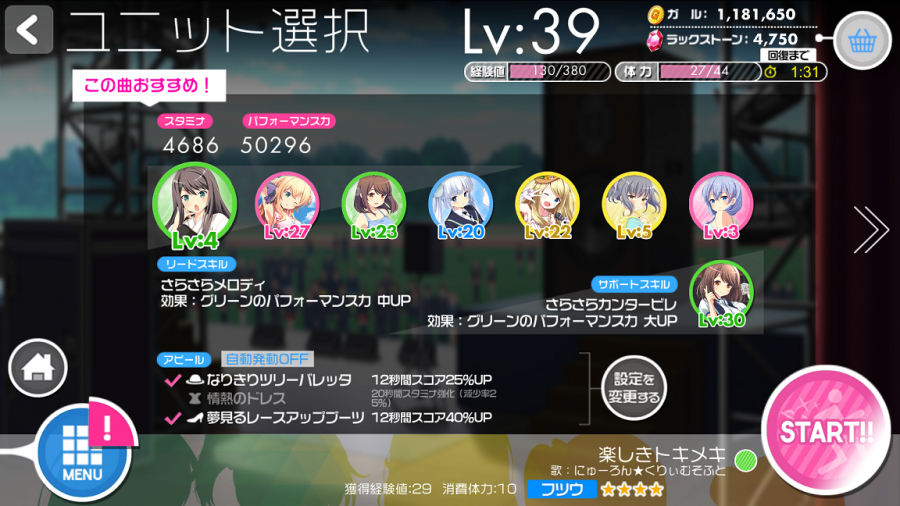 Finally, you'll see a screen like this one. This is where you choose the unit you'll be playing the song with. The rectangular sign at the top-left will either display the name of your unit (if you assembled the unit yourself and gave it a name), or the text "こ曲のおすすめ!", which indicates an on-the-fly unit recommended for use for the song, complete with recommended clothing items.

The information in the big box here displays:

When you're finally ready, hit the big pink START! button at the bottom-right, and get playing!

Here's where you put your rhythm skills to the test!

Above is an example of what you'll see after the "Ready, GO!" sound clip plays and the song credit disappears. At the top is the bar showing your score progress, with actual score at the top-left. The different score rank grades will be at different points on this bar depending on difficulty. At top-right is your stamina indicator - don't let this run out, or you'll fail the song!

Heart-shaped notes will travel from the pulsing center heart out to their tap zones, which appear only when there's something to tap.

Occasionally, you'll see other textual elements on screen - at the top near the pulsing heart, you'll see note timing indicators, score/combo rank milestones, and your current combo total. There'll also be little bits of text that scroll across the screen to indicate cards' skills activating.

At bottom-left and bottom-right, there are two buttons that you can tap to activate a clothing skill - just be careful not to break combo when you're activating the skill!

At the very bottom, once your combo is high enough, you'll see the disco ball for Mirror Bonus pop up. Swipe it to keep it spinning in order to score higher!

Songs can end in 3 ways - a Full Combo Clear, a regular Clear, or (sadly) a Game Over. Aim for the former as much as you can!

After successfully clearing a song, you'll be presented with a series of screens detailing your results. 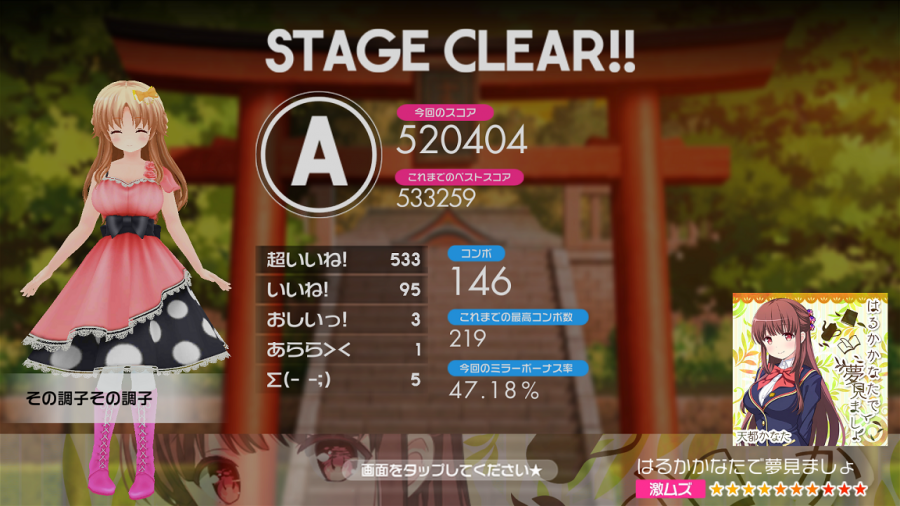 First off, your Center Girl will have a little something to say, based on your score rank obtained during the song. Next to the big score rank indicator will be your score for that play of the song in question, and below that, if applicable, your current high score on the song. Below that on the left is a breakdown of how many of each note judgments you hit - try to get as few of the last three as possible! On the right will be your highest combo for that play of the song, your highest combo over all plays, and the Mirror Bonus percentage you were able to obtain during that play. To the lower right is a reminder of the song you just played.

This screen only comes up after playing a song from an event. The top part displays how many points you've earned overall from that play, broken down into points gained from score rank on the left, and combo rank on the right. Below will be your overall total of event points, and an indicator of the next reward you will be able to receive from gaining more points. 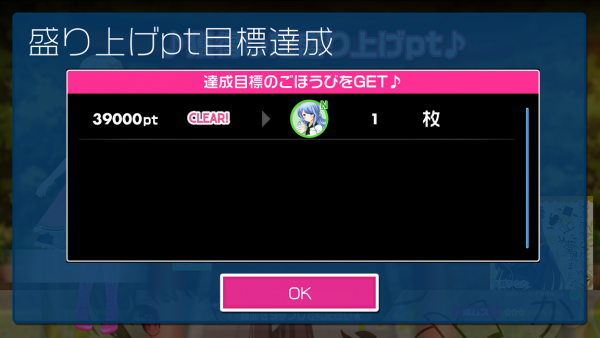 If you gain enough points to net you one or more rewards, there will also be a popup detailing what point milestones you met, and the corresponding rewards. Pick these up from your present box!

Here's where the game details what you've earned as a result of your performance. At the top, it shows your current level as a result of EXP gained from playing the song, with progress bar and another indicator of just how much EXP you earned. Below that will be displayed your Song Goal ranks earned for that particular play (for Score and Combo), and the change in Gal/Friendship Points. The last part shows the prizes you get - you might get N cards, trainer cards, hearts, or even Power Mists! Drop by your present box to accept them.

If you do level up, you will be shown popups detailing bonuses gained (more Stamina to play songs, another friend list slot, another Center Girl slot) and, if applicable, a notice of the new story chapter you can view.

Favourability is a function of your maximum combo only. The formula is the same calculation used per combo string in School Idol Festival, which, explicitly, is:

All division operations are done in integer division.

Additionally, this is where the game will also note the rewards you get from meeting Play Goals. The first popup shows your progress on each goal type (Score, Combo, Clears), and the second lets you know exactly what you've earned. These rewards are also picked up from your present box.

Note: As of the update on February 26, 2016, the highest score rank is now SS, and you also are tracked on how much Mirror Bonus you get on a song! If you get a Full-Full Master (Full Combo + Full Mirror Bonus), you receive further Play Goal prizes!