This page is about the original game that Girlfriend Kari started with - the card game RNG simulator.

Girlfriend Beta, also known as Girlfriend Kari (ガールフレンド(仮)), is a popular Japanese social mobile game created by Ameba. This game is largely a luck-based collection-based card games, where the cards depict art of various anime girls known to give off a somewhat "cute" and "attractive" presence. It's primarily a game for collectors, utilizing various systems like gachapons and luck-based encounter systems.

In short, this is a card game with cute girls, and it's all about collecting the cutest cards that you can get. Of course, it's not as simple as it sounds. We'll get to that shortly.

Every card in the game depicts a "cute" girl drawn in an anime-esque style with a certain outfit in a certain pose. There are over 50 girls (probably more around 100 different girls) in the game, each with their own unique personality and interests! This means that there's bound to be a couple of girls that everybody likes, since they do cover a wide range of personalities, interests, and archetypes. Every girl has multiple different cards, which means one girl might have roughly 30+ different cards! For a hardcore player, this is a lot to collect. Thus, in essence, this is a game for collectors, as the main objective is to collect the cards you want the most! New cards are also released at a very rapid rate through events and special promotions, meaning that the game can get addicting very fast, especially when you're trying to collect all the cards of a girl you like. The attractiveness of the cards will keep you coming back to play for a chance of getting a better card! The art design of most cards is done by QP:flapper, a relatively famous anime artist who has done art and character designs for various Manga and Anime as well (ex: Sora no Method). His style of art fits the game very well, and keeps players coming back to see more cards; meaning more art of their favorite girls! Thus, a great number of people play it for the visuals.

Just 12 of the many girls in the game! This is the typical style of art you'll see in the game.

Aside from the anime-esque art, most girls also come with voice acting! All of the voice actresses that voice the various girls in this game are all pretty famous. For example, Rie Kugimiya, Tamura Yukari, Ryoko Shintani, Kaori Fukuhara, Satomi Sato, and more are all in the game! This is appealing to those who are fans of these various voice actresses - many of which are popular and have even a cult following in Japan. The voice acting in the game is done relatively professionally as a whole. Almost every new card contains more voice acting, so there's an almost endless stream of new voices and sounds coming to the game at a rapid pace! 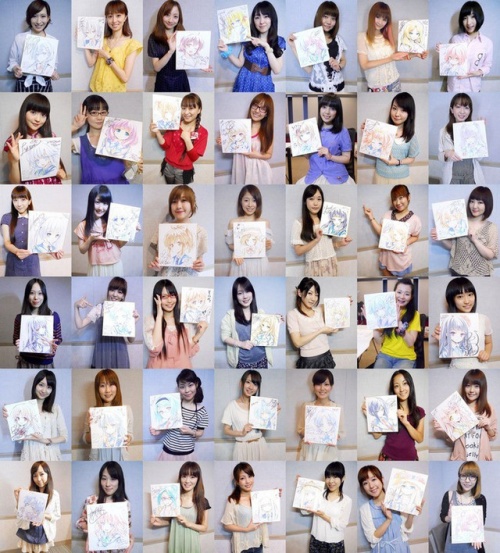 Some of the voice actresses that voice characters in Girlfriend Kari! They're holding up art of the character they voice!

Each girl also has her own backstory, her own personality, and information on how she does at school and what clubs she's a part of! Every girl has a pretty unique personality and interests, so there's generally at least one girl that most people will like. The game, anime, manga, and other official material all help to develop each girls' backstory and personality. Most people will find themselves attracted to at least one girl if not multiple, and may claim them to be their "waifu." Thus, one of a player's main goals may be to collect all the cards of their favorite girls. By doing so, the player will slowly learn more about the girl!

Now, let's get more logistical as to why this game became popular, and why Ameba is raking in the profits. Every card that you obtain in the game can be grouped into a rarity level. The rarer the card, the more attractive its art generally is, and the more voice acting the card has. Since rarer cards are more appealing to most people, players will often come back to the game for the chance that they will one day obtain that extremely rare card of their favorite girl. Now, cards can be collected in various ways. You can get the normal, common, default cards by playing through the story (area or class, whatever you wanna call it). But since everyone can do that the cards are pretty bad (stat-wise and art-wise). Thus, you have to get the good cards somehow else - that comes from doing a gasha roll, attendance checks, pure luck, battling other players, and events. These all have a chance to provide rare cards. However, the chance of obtaining the rarest cards in the game can be abysmally low - the chance is lower than 1%! However, because of this lingering chance, players keep coming back and playing for the chance that the luck and the random number generator will work out in their favor.

A comparison of the art for cards of differing rarity.

In order to maximize the chance of getting more rare cards, you need to build a strong deck of girls - this is so you can do better in events, to have a higher chance of obtaining rare event cards. What does this mean, you ask? Well, every card is good for something other than just being cute! Each card you obtain has stats, which include attack, defense, and cost. The rarer the card, the better its stats. Thus, having a deck with lots of rare girls allows you to perform better when fighting various enemies or other players. This leads to a positive correlation with performance in events. Since events generally test how powerful your current deck of girls is, having a deck with better stats will allow you to perform better in events, leading to you having a better chance at obtaining the rare event cards. Also, events are generally where most players obtain new cards without having to pay money, which means that there's a lot of fierce competition to obtain the limited-edition cards (where only a specific number of the card are given out!). There are also other ways to gain cards, such as rolling at the rare gachapon. Ameba often gives out free rolls at the rare gachapon, or will give you special tickets that might guarantee a high-rarity card!

They say good things come to those who wait - this game is the epitome of that statement! Just keep playing, and one day, you'll be able to obtain that rare, cute card that you have always been hoping to obtain!

This is Ameba's Business Strategy

This is known as Ameba's business strategy, and it works very well. By providing users with a small chance of obtaining cards with high rarity, and by tempting them with special promotions, events, and even occasionally giving out free cards or tickets that guarantee high-rarity cards, players keep coming back for more content, and for the chance of obtaining more rare cards. Thus, there are over 7 million registered users that play this game. Ameba earns money by holding special promotions, where people can pay money to roll in the special coin gachapon, which consists of a specific set of super rare cards. The chance of obtaining the cards are significantly higher than normal as well, which is very enticing to most people! Thus, many people dish out money for this "increased" chance, which gives Ameba profit. Thus, Ameba constantly produces new material to keep players active and returning to the game. After all, who isn't attracted to the beautiful, cute, anime-style art of the cards? Who doesn't want to form a gigantic harem with over 50 girls?

Because of Ameba's successful strategy, the game has gained massive ground in Japan, providing way to various products being created for the series, including Manga, Anime, and even Video Games. There's also quite a few doujin works! With over 7 million registered users, the game is bound to be huge with a pretty large cult following. If you haven't noticed, some of the pictures on this page are from Anime Japan 2014, a large anime expo consisting of Tokyo International Anime Fair and the Anime Contents Expo, featuring booths with large companies like Type-Moon, Aniplex, and TV Tokyo. Guess which series is also among those with large booths? Girlfriend Kari. 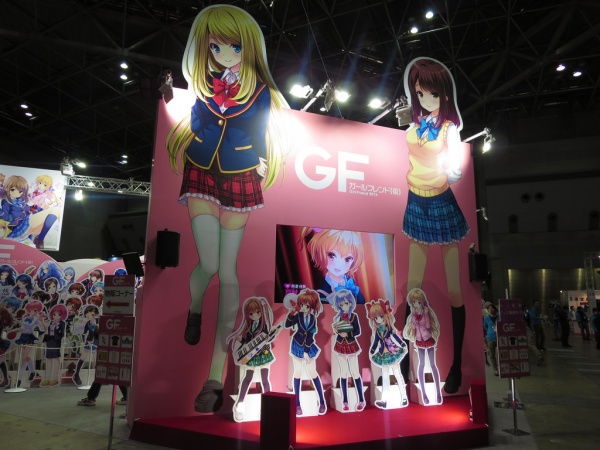 With over 7 million registered users, the game is extremely popular in Japan but relatively unknown outside of its home country. The main reason is because the game is only in Japanese and is unavailable in any other language. Japan also frequently airs advertisements for this show, because Ameba has enough money to keep producing advertisements for the series! Some of them are pretty hilarious, and most are interesting.

Merchandise of the game can be found throughout various parts of Japan - including at Family Marts! There are key chains, folder covers, posters, acrylic boards, and even body pillows. 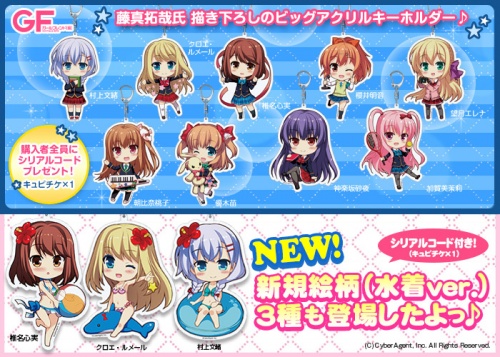 In short, Ameba's idea of creating such a game is genius. The pure concept itself is it's addicting. It's a giant combination of cutely attractive anime style visuals with professional voice acting, with tons of girls - each with their own, unique personalities and interests. You're bound to be attracted to several of them, leading you to play the game to obtain the cards. The chance of obtaining the cards (drop rate) is so low that you'll keep on playing - while Ameba produces dozens of new cards per month. It leads to an endless, infinite cycle - that only leaves you addicted and coming back for more.

This has ultimately led to the success of the game and series. Now sporting a rhythm game and its own magazine, GF Kari is truly one of the largest mobile games in the Japan.

Want to get started? Head over to the main page and look for more information in the table of contents! Want more of a "guide" to help you along? Try checking out our Walkthrough Project!